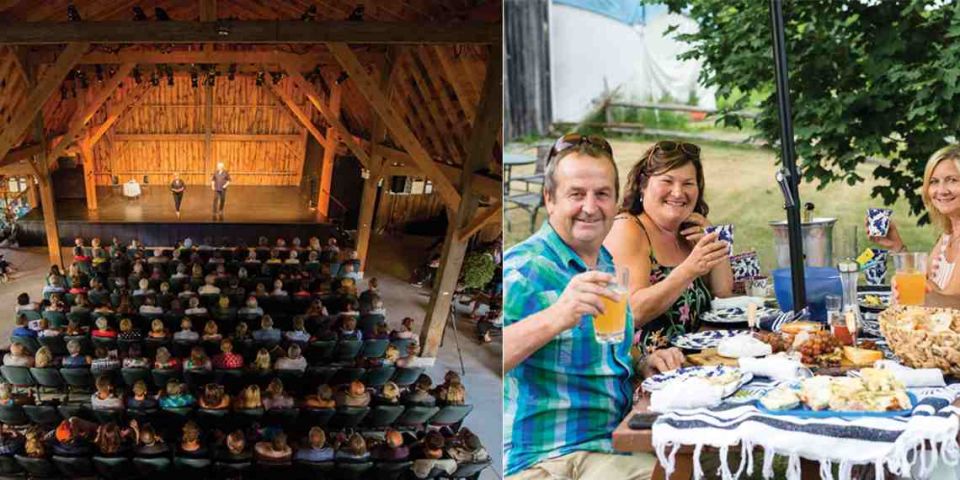 Every special anniversary must include a big party and Westben is doing just that in 2019 with a remarkable 20th anniversary celebration concert on June 2. The date marks the beginning of two full months of dazzling performances at The Barn, as it is fondly known. For those not familiar, the timber-framed, purpose-built concert hall with its superb acoustics is set among the rolling hills of Northumberland County. Less than a two-hour drive from Toronto, an hour and a half from Kingston, forty minutes from Cobourg, Belleville and Peterborough, and about three hours from Ottawa, the venue, its environs and the spectacular natural setting are worthy of exploration.

Westben is the brainchild of performers and husband and wife team, Brian Finley and Donna Bennett, who co-founded the organization with the help of an enthusiastic and eager community. World class musicians and performers gather in a field in rural Ontario to play or sing or entertain before enthusiastic loyal audiences. A summer concert at Westben has to be tried to be fully appreciated; nothing compares to it. One may describe Westben as informal, playful, relaxing and exuberant. It’s a gentle and diverse, culturally empowering and creatively enriching, where you can feel the passion of the performers as well as the audience generated energy.

“June 2 is going to be an exciting concert,” said Bennett, “We will welcome back guest artists who will perform classical, jazz and Indigenous music, as well as songs from past productions, like The Sound of Music, Jesus Christ Superstar, Fiddler on the Roof and Joseph and the Amazing Technicolour Dreamcoat.“

In 2018 Westben announced a reimagined future and a new vision, with changes acknowledging a new direction and forming a prelude for their upcoming twentieth anniversary year. The move saw Westben evolve into a Centre for Creativity and Connection through Music, encompassing not just an annual summer concert series, but a year-round facility; and a convergence of people, bringing ideas and activities together and making those connections through the highest standards of music making. 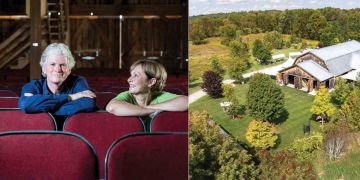 What began as a cornfield on a fifty acre farm at the beginning of the twenty first century, transformed into a venue incorporating a four hundred seat rustic yet sophisticated structure catering to music and the arts. What followed over the next two decades was the welcoming of Canadian musicians, international artists, new graduates, household favourites and more as the community-focused, not-for-profit organization grew, evolving to widen its repertoire to serve growing audiences and broadening tastes, whether it’s jazz and pop, folk and fiddle or Broadway and comedy.

“Brian and I are just so happy to be celebrating twenty years of Westben together with the community,” said Bennett. In 2017, the couple received the Order of Canada for their work with Westben. “We accepted it for the team, Team Westben!” adds Bennett.

Westben is not just a concert venue and it does not solely cater to the traditional classical crowd, although it does offer many classical options for the many faithful followers. “Westben is more than music, it is an experience. The concert venue is a beautiful barn on a fifty acre farm, with side doors that open fully, so from inside the audience can see the meadow and the pond, hear the birds, and feel the warm, gentle breeze. Adding to this is a series of unique, interactive experiences that we are developing around the concerts,” said Bennett. “We are giving people more to do by coming to these experiences, but it also gets them more involved in music; they learn about it, they have fun with it, they interact with it and they can spend more time exploring it.”

Over its twenty years, Westben has presented close to four hundred concerts featuring several hundred performers, including the very best Canadian talent, international artists and local musicians. It has sold more than 91,000 tickets. Annually, it attracts about 9,000 patrons from across Canada and beyond. Westben has mounted fourteen operas and ten musicals, including several world premieres, and has welcomed some of the world’s most accomplished performers. To allow programming to continue year-round, Westben has operated at a second venue since 2013 at the Clock Tower Cultural Centre in Campbellford. These offerings include House Concerts, First-Friday Lunchtime Tick Talks, Concerts to a Tea, as well as Fall and Christmas concerts.

Westben endeavours to provide something for the whole family to enjoy with a broad spectrum of genres for the most discerning patrons. The line-up is designed to offer an inclusive and affordable platform for all, youth tickets for all performances are just $5, with a great selection of big names and interesting personalities, along with a variety of musical tastes and musical eras.

August 1 brings international star violinist James Ehnes, and opera singers, soprano Joyce El-Khoury and baritone Jason Howard performs on July 27. Ehnes and El-Khoury are known all over the world from their performances at the Sydney Opera House, Covent Garden in London, England, and other European Opera Houses, plus the Canadian Opera Company. “And now at The Barn!” Bennett enthuses.

Developed by The Royal Conservatory of Music, Kuné–Canada’s Global Orchestra is an eclectic ensemble of musicians hailing from many corners of the globe, all of whom now call Canada home. Using over twenty traditional instruments from sitar to voice, Kuné will take listeners on a musical journey around the world and back home. Before the concert, on July

28, we welcome Kinsip House of Fine Spirits, a distillery from Prince Edward County, which will be paired with international foods by chef Melissa Smeets from Mellie Rolls, along with a local storyteller.

Jeremy Dutcher is the winner of the 2018 Polaris Music Prize. A classically-trained tenor/composer, Dutcher blends his Wolastoq First Nation roots into his music. He will perform from his debut release, Wolastoqiyik Lintuwakonawa, which involves the rearrangement of early 1900s wax cylinder field recordings from his Indigenous community, which he sings in his own Wolastoqey language. “Expect an entirely new musical aesthetic that shape-shifts between classical, traditional and pop from this gifted artist,” says Bennett.

TGI Fridays offer pop, folk, comedy and more, and on the meadow why not enjoy delicious pre-concert barbeques? Canadian pop/indie treasure Basia Bulat is welcomed on July 5, and for Corner Gas fans, Brent Butt drops by for a much anticipated evening of some seriously funny comedy on July 12. Andy Forgie returns with a show called Abbey Road to Woodstock on July 19 and Juno-nominated folk artist Rose Cousins appears July 26.

Bennett is “really excited to be offering a family-friendly show at The Barn.” Grandparents, parents and children alike will enjoy The Snow Queen (based on a storyline similar to the musical Frozen), presented by The Canadian Children’s Opera Company on July 7. There will be interactive family activities on the meadow before the show.

For those who enjoyed the Dare to Pair events last year, they are back again this year (June 30, July 13, 20, 21, 27 and 28) with something new. Pairings of food, wine with an artist, will now add storytelling. Imagine wine tasting al fresco with a wine expert and savouring delicious food prepared by a local chef, meeting the artist before the performance and hearing inside stories. For example, on June 30 at the Vivaldi Four Seasons concert, you might even meet Mr. Vivaldi himself!

On July 20 before the Moonlight Concert at The Barn, you can come taste the music with us in a new Dare to Pair experience called Chocolate Voices. It’s a sonic food pairing led by multiple award-winning chocolatier Angela Roest from Centre & Main Chocolate and opera singer and author Chris Cameron. They will take you on an adventure like no other. Discover how sound heightens your sense of taste, it will surprise you.

For the adventurous who can keep a secret, another of Westben's new experiences is a Secret Concert on July 21. Both location and the type of concert remain undisclosed till showtime. Participants are told when to arrive, what to wear, and how many people will be in the group, but no more. “These experiences have been incredibly rewarding,” says Bennett. “Seeing the participants’ faces discover new things is so joyful. Plus the partnerships with area businesses and community members have been so incredible.”

Tradition dictates, Westben wraps up the summer concert series with its famous Jazz Fringe festival. “We have jazz at The Barn, but it’s also jazz in restaurants in Campbellford, Warkworth and Hastings.” “After the show or before the show, you can go to a restaurant and have a meal and enjoy some jazz too.” And Matt Dusk fans take note as he will be performing on August 3.

Never experienced a concert under the rafters of a hand-crafted, locally-milled wooden barn before? Escape the city and embrace a country concert of world class proportions. Why not discover the warm intimate space of Westben this summer where culture meets nature with a friendly smile. Feel the breeze, soak up the scenery and be a part of the momentous vicennial celebrations! Check out westben.ca for detailed scheduling.

Westben Centre for Connection and Creativity through Music