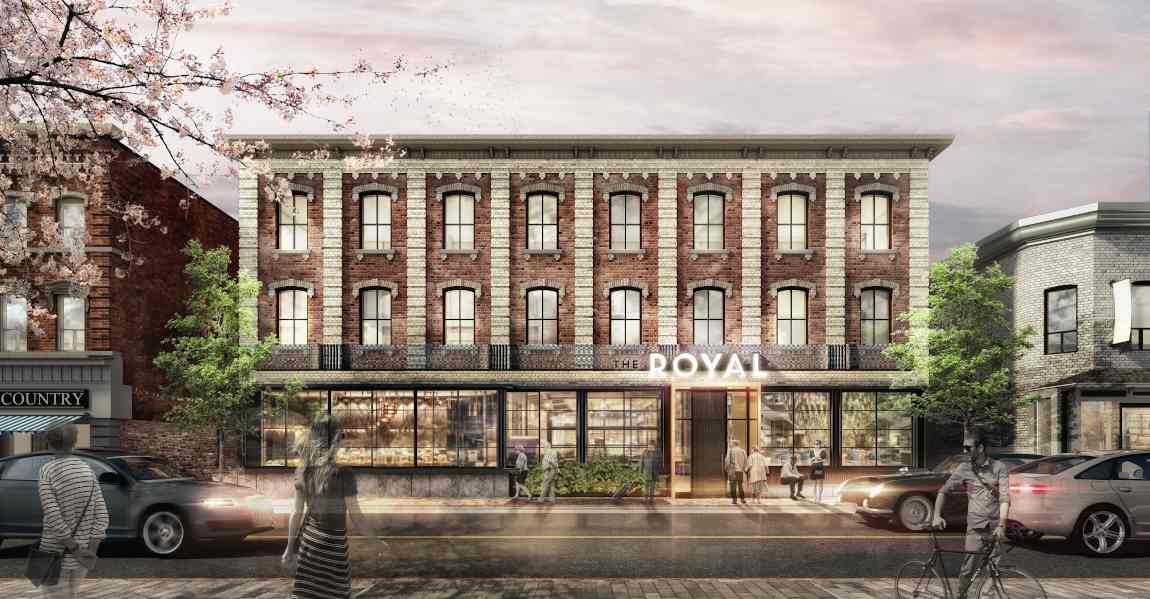 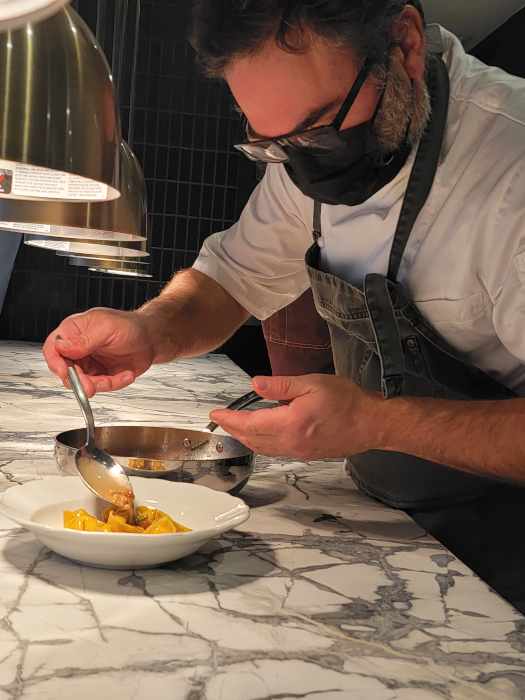 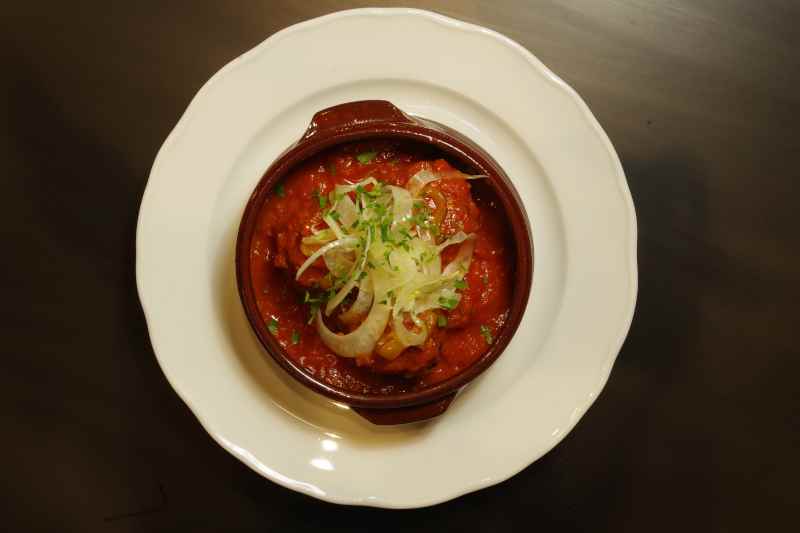 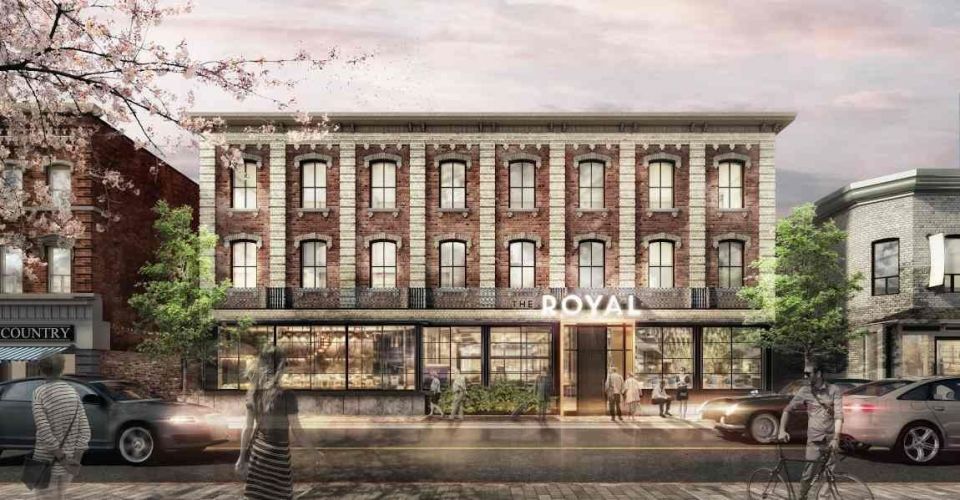 Patience, we are told, is a virtue and for the Royal Hotel, its owners, management, and staff, the patience manifested over five years of development is becoming something of a guiding philosophy...the concept of UNRUSHED will be fully embodied in the guest experience. But more of that another time.

Chatting with Albert Ponzo, executive chef of the Royal Hotel, and Nick Sorbara, in charge of the market garden at Edwin County Farms in Prince Edward County, and responsible for supplying much of the food Albert and his team will be cooking, there is a palpable and growing sense of excitement, a sense of excitement that’s been growing, albeit slowly for almost five years. Coupled with that excitement is a certain nervousness and apprehension as Nick and Albert both understand that very soon now, fine words and lofty aspirations will need to be translated into action. Fast approaching is the time when Nick will have to ship his produce to The Royal’s kitchen for Albert and his team to transform into delicious, exquisitely plated meals for an audience of discerning patrons. In a just few short weeks, theory must become practice: the time has come to stand and deliver.

As we chat in the tranquil sanctuary of the Wexford, just a hundred or so yards away dozens of contractors are putting the finishing touches to The Royal Hotel...work continues apace inside and outside...trees are being delivered and planted, landscaping is happening, furniture is being delivered, doors are being hung, lighting is being connected, floors are being laid, counter tops are being fitted and somehow Sol Korngold, the project lead and general manager is keeping track of it all.

Had one Greg Sorbora’s various offers to purchase the former Methodist Church in Picton been successful, he might have had a beneficial impact on the architectural merit of Main Street somewhat earlier. Unfortunately, that fine edifice was demolished and to this day the site remains undeveloped. Undeterred and “being a sucker for old buildings” when the Royal Hotel became available in 2013, Greg was able to act. Whilst Sorbara owns a property development company, he has made it known, “that this is very much a personal project.” In such bad shape was the structure that County officials would not even allow an internal inspection: its roof had collapsed and there was a severe mould problem. In essence, the entire edifice has been rebuilt with the exception of the facade and even that has had substantial repairs with handmade bricks ironically named Ontario, which were imported from Holland. Initially anticipated to reopen in fall of 2019, the project was delayed by the collapse of a supporting wall in April of the previous year. Sorbara’s ambition was “to preserve the building and to rebuild the hotel and make it a focal point for The County.” That ambition has had to wait patiently as, following the wall’s collapse, when things just about got back on track, COVID-19 hit.

However there are many positives from those delays. For Albert Ponzo, it has given him the time to fully integrate himself into the community, to set up and develop his own farm, and to learn how to cultivate honey and eggs...which are so popular among paying customers he has yet to taste one. The community has recognized his contribution to The County Food Hub program at Sophiasburgh School. (See the Kitchen that saved a school Grapevine Magazine summer 2020). And among other recently acquired accomplishments, he can strip down a diesel engine and maintain his own tractor. A member of the family who happens to be a mechanic has helped the pair service and keep running the assorted collection of ancient machinery they picked up here and there, second hand.

Though describing his family as “eaters, cookers, bakers, and growers,” Nick Sorbara’s background is film studies and then film making as a producer. Perhaps not exactly ideal to be in charge of a market garden, I suggest, but he finds similarities in responding to the demands of an ever changing situation. Construction delays have given him time to learn his craft. “You do not just put plants in the ground and sit back and expect them to grow,” I am told, “Like anything else, it takes practise and some good luck doesn’t hurt.” Growing the best vegetables takes time and is hard work. Nick studied farming at night school and was advised by Eric Sholtz about market gardening growing systems. “I am really proud of where we are after just four years,” proclaims Nick.

In this period of adjustment, it is fair to say both Albert and Nick have cast off their cityot identities and become fully fledged country dwellers...neither misses the excitement of the big city. The County’s unique osmosis has seeped into their bones and they are no longer the same people they were when they arrived. There is a very genuine enthusiasm when they talk of hickory bark syrup or making acorn flour, even the tedious process of leaching out the tannins, sounds quite exciting as they enthuse about what might be made, be it cookies or polenta. The relationship between these two mirrors the relationship between the hotel and the farm: it is the ultimate farm to fork experience - their own farm and their own hotel. Through spring, summer, and fall, seasonal produce will guide Albert’s menu planning and they are working on preserving seasonal produce for year round use, collaborating with Sprague Foods to can their own tomatoes, which of course harks back to the history of The County. Down the line, guests will be offered eco-forest walks to help further their understanding where food comes from and appreciation of nature.

Though Nick and Albert might now be country dwellers, inspiration for the Royal’s culinary perspective originates from the New York suburb of Pocantico Hills. A fact finding tour to the Blue Hill Restaurant at the Stone Barns Centre for Food and Agriculture proved instructive and has in many respects provided a model for The Royal Hotel. Dan Barber is not only the head chef of the Blue Hill restaurant but an innovator in sustainable farming practices and culinary techniques.

Wearing my steel toe capped boots and hard hat, I am guided through a cacophony of construction noise to the kitchen: it is the first day that Albert has been allowed in there. He’s in the corner trying to make sense of an oven’s touch screen controls.
It is hot: the pizza oven is curing and is running full blast, like a potter’s kiln, but with the door open. It’s a wonder anyone can concentrate in this atmosphere, but Albert and his second in command, Jeremy Fowler, are preparing some dishes to photograph. I wonder what Albert will come up with: how will his Sardinian origins blend with his classical French training? The answer is, “We’re celebrating our Italian upbringing with a nod to French technique. Honest food with a strong focus on seasonality and the origin of every ingredient. Farm to table for real.”

I am privileged to observe Albert and Jeremy cook up a representation of what future guests might expect: Cappelletti, stuffed with squash, brown butter, walnuts, and sage, clams from B.C. in a white wine and herb sauce, folllowed by Polpette, (beef meatballs) with marinated red pepper, fennel, and tomatoes accompanied by a fresh green salad. For dessert, one of Albert’s favourite treats, Cannoli.

Opening soon, The new restaurant will be known as The Dinning Room. Albert and Jeremy are looking forward to serving you.