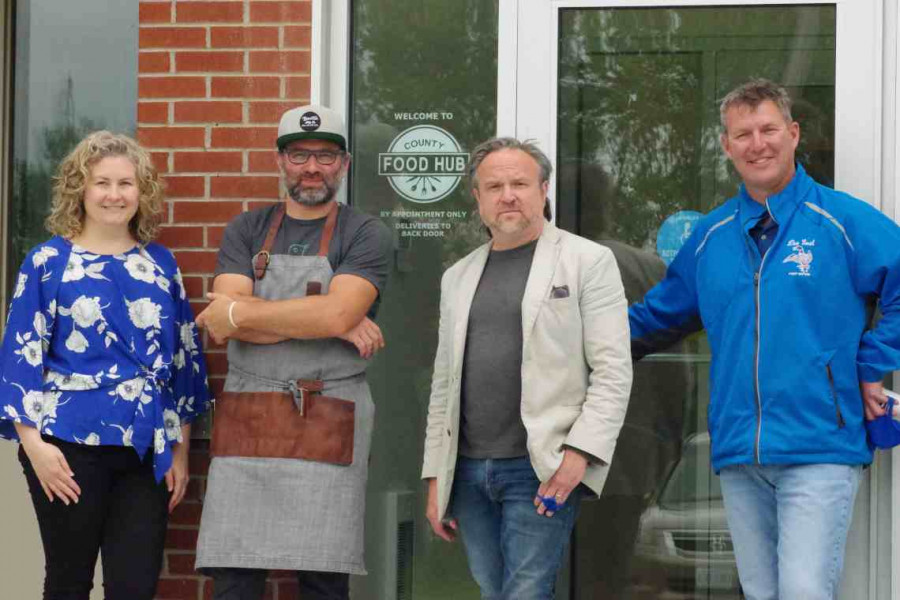 The Kitchen that Saved a School

Solving problems is fundamental to the human condition. Solving a problem with a solution that has two beneficial outcomes is a rarely accomplished feat: but killing two birds with one stone is exactly what the luminaries behind the County Food Hub in Sophiasburgh have achieved.

Faced with the all too typical and predictable challenges of a rural school: a declining population and the very real threat of closure, a group of determined and visionary parents, after some brainstorming came up with a novel rescue plan. They would lease approximately half the building, a mere six thousand square feet, and install a commercial kitchen and establish the County Food Hub. Though originally financed by strong community support and several grants, they anticipated generating revenue by renting the kitchen facilities and storage space to commercial enterprises and budding entrepreneurs. A shortage of shared kitchen space had been identified locally and it was expected the facility would have broad appeal from locals to professional caterers. Meals would be provided for the food insecure and everyone would be satisfied, and the school would be saved. That was the dream and now the dream is a reality. The school will not be closed, and registration is now rising, to approximately one hundred and twenty-one children at the last count.

It started with one kitchen and now there are two spaces, both meeting public health certification standards for food related activities, one space is thought to have the potential to be a fulfillment centre. The primary kitchen boasts a stainless-steel combination oven than can roast, braise or steam with controlled humidity. Settings can be saved to a memory stick which means that after some experimentation with your recipe, the results will be of consistent repeatable quality.

Part of the initial vision was for the school children to learn about food and food preparation. Food literacy is a growing interest and it is hoped that the topic will be added to the school’s curriculum. A little way off in the future is the prospect of the school children growing their own food from which to create recipes.

It helps in no small measure to have Chef Albert Ponzo of the Royal Hotel, on the board of the Community Food Hub and to have the services of both said Chef and Chef Jamie Kennedy as volunteers in the kitchen a couple of days a week to satisfy the community demand for good food. Low income families can access healthy food at a reasonable cost. Food to Share was the first long-term tenant of the County Food Hub, using the facility for storage, distribution, and an office.

Long-term goals are to foster a commitment to healthy eating by developing a food and education centre which will continue to promote food literacy and advise people with ideas, how to bring those ideas to market. “This will strengthen rural education, giving an outlet for surplus space in schools and provide socio-economic opportunities for the local community, which will further support Prince Edward County’s rural renaissance.” advises County Food Hub manager Mike Farrell, adding, “We have space and the desire to encourage new businesses.”

My visit coincided with that of Hastings & Prince Edward District School Board’s Director of Education, Sean Monteith who has been fully supportive of the project and has monitored its progress from its auspicious start.

Sean acknowledges that he is now not just in the education business, he is in the food business, because students who eat better learn better and have improved scholastic outcomes. The board’s remit is to support children in education to have more children graduate with a future. Sean sees his responsibility to the community in non-traditional ways, “Education is not just mathematics, we need to take a holistic approach.”

He and the board are very optimistic about the achievements of the County Food Hub in Sophiasburgh, because it is seen as a scalable model that could be replicated in other locations where rural education is under threat.