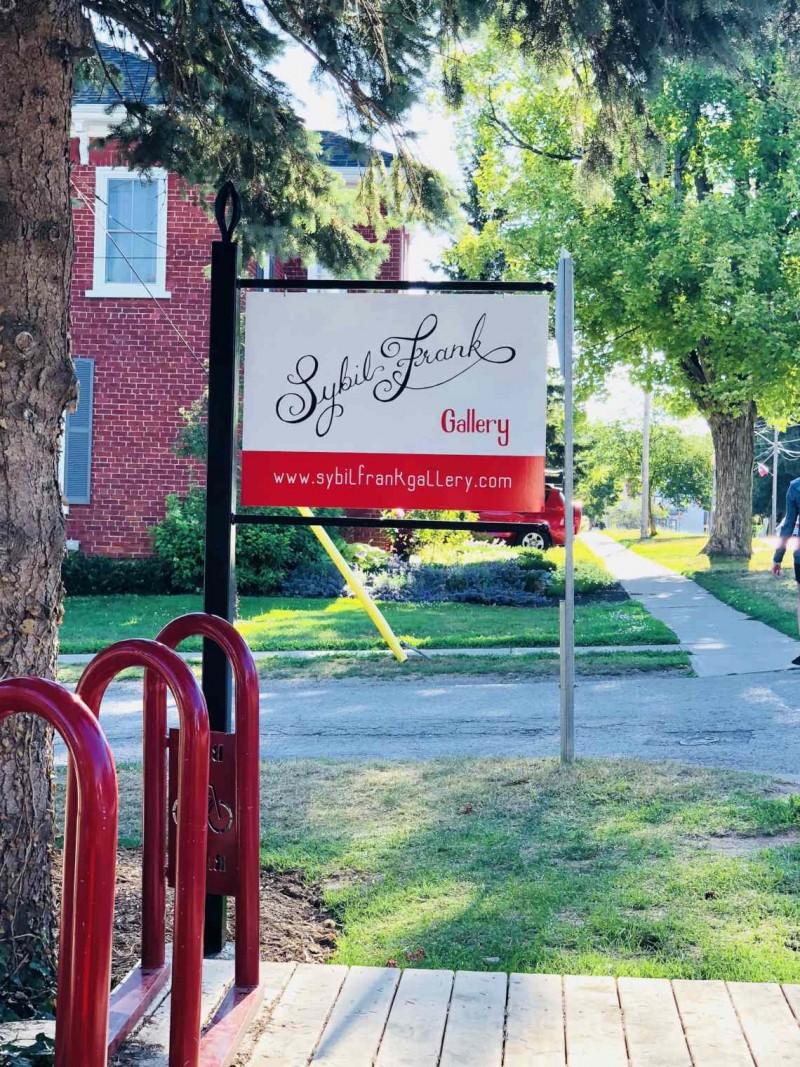 I must confess I had failed to observe the very existence of the Sybil Frank Gallery for the mere six years it has been open: an inexplicable lapse requiring immediate corrective action. Whilst occupying a prominent position at 305 Main Street, it should be noted that the entrance is to be found on West Street.

The gallery is small consisting of several intimate interlinked spaces with the whitest white you ever did see covering the walls and the floor. However the effect is not sterile antiseptic hospital, or hostile white cube gallery, it’s surprisingly warm and cosy, with a subtle brushed texture adding visual interest to the gleaming floor. Whilst it might seem bizarre to draw attention to the floor, it is a major contributor to the ambience and is cosseted daily with a steam clean courtesy of gallery owner Craig Alexander. The quality of the ambient light is quite spectacular and in combination with the white of the walls and floor gives the impression that the paintings are floating in space. With the winter light reflecting off the snow, this effect may be enhanced. Craig describes the space as, “The meeting place of magic.” And on my visit magic happened in front of my eyes, or should I say ears, with artist John Lennard playing the saxophone right in front of me and right in front of his own self-portrait playing the saxophone.

As well as running the gallery, Craig continues to work as a casting director for advertising, television and films and this background has been surprisingly helpful in the sale of paintings, “Matching ads or films to actors is not too dissimilar to matching paintings to prospective buyers,” he observes.

Craig, despite possessing an impressive collection of Fluevog footwear, claims not to be a “fashionista” though he does admit to being very influenced by fashion in one specific avenue and that is the way drapery flows when a model turns at the end of the runway. The idea of a flowing uninterrupted motion influences his design decisions when it comes to planning the exhibitions: the most careful consideration is given to each of the paintings’ tone and mood and the building’s meandering architecture so adjacent works fit seamlessly together like a piece of music. The phrase, the sum is greater than its parts, comes to mind. Time spent living in New York now pays dividends in the efficient use of space: works are displayed with the utmost attention to detail creating seamless transitions from piece to piece to lead the visitor’s eye from one work to the next and right through the gallery. In effect the gallery is composed as Craig’s personal artwork: his own canvas if you will or as he puts it, “Stitching together a coherent story of colour and shape.”

New exhibitions roll out every five weeks and their content reflects Craig’s relationship with his grandmothers, Sybil and Frances who were enormous influences throughout his childhood. “The gallery is named after my Grandmothers Sybil and Frances, whom we always called Grandma Frank, I try to create a story through art that honours and emulates the memory of both these amazing women; one, bold and daring, who could command attention just by walking into a room, and the other graceful, elegant and ethereal.” Sybil manifests herself in contemporary modern works whilst the ethereal character of Frank is reflected in more romantic pieces and some works are simultaneously Sybil and Frank.

Sybil Frank continues to evolve and Craig loves to be proactive and seek out new artists. He councils however that, “One should not really buy art as an investment you should buy it because you love it.”