Shots in the Dark...Pairing Chocolate and Spirits 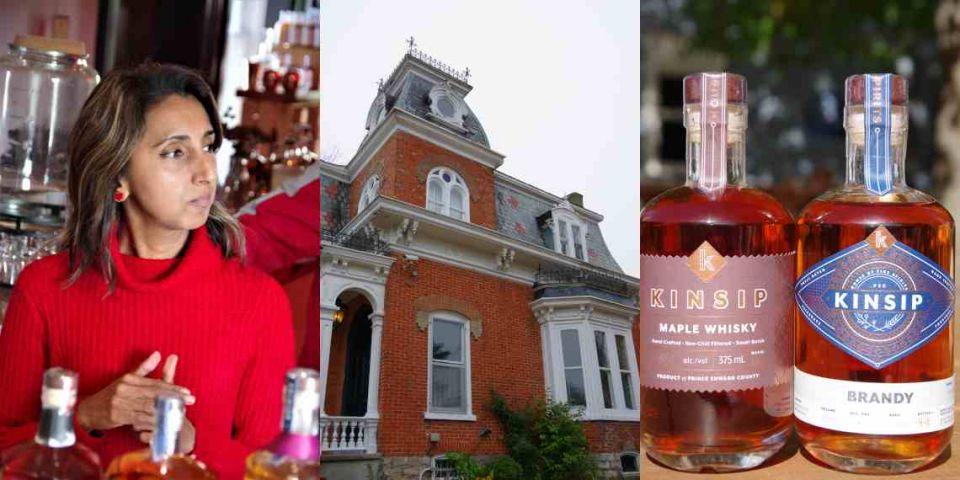 Shots in the dark: Chocolates Dance with the Spirit World. by Priya Rao

Seasons change and with them so do our drink preferences. With winter upon us, now is the time to leave our familiar favourite spirits on the top shelf and warm ourselves from the inside out with something new.

With this in mind I dropped by Kinsip House of Fine Spirits on Gilead Road in Prince Edward County to sample their collection and engage in a bit of fun with Jeremiah Soucie who co-owns the distillery with his wife, Sarah Waterston, her brother Michael Waterston and Michael’s partner, Maria Hristova.

On the agenda for this sunny winter’s afternoon was the challenge of pairing chocolates with Kinsip’s various spirits. We had a selection of truffles from Cocoa Bistro along with several chocolate barks from Centre & Main with which to entertain our taste buds. Both of these companies produce genuinely hand made chocolate of the highest possible quality. It’s a tough job folks, but someone has to do it I suppose.

Kinsip is a ‘grain to glass’ distillery, meaning that they grow their own grains. They also source the rest of their ingredients as locally as possible. The wine that goes into their brandy and the syrup that goes into their whiskey barrel aged maple syrup both come from local area providers. It is part of their overall mission to bring the conversation of ‘terroir’—primarily heard in discussion of wine—to the spirit world.

Terroir refers to the characteristic taste and flavour imparted by the land, the soil and the overall environment in which it is produced. From year to year, this results in slight differences in the taste of a product depending on factors such as rainfall and temperatures.

There’s really something for everyone at Kinsip, including gin, vodka, whiskey, brandy and rum. Some of these spirits are natural partners to chocolate, others not so much, but overall we found some perfect matches, and some quite surprising pairings.

Up first was Centre and Main. Their lavender dark chocolate bark was a natural fit with the Juniper’s Wit Gin. Gin is perhaps the most acquired taste with people either loving or disliking the flavour of juniper entirely, but the lavender in the chocolate brings out the lavender that is in the bottle thus softening the juniper notes of the alcohol.

The Toasted Coconut bar blended ideally with the Duck Island Rum because the coconut brought out the same coconut notes imparted into the rum from the new oak barrels in which it was aged.

Tart Cherry bark, we matched with the Maple Whiskey. The tartness of the cherry heightened the bitterness of the chocolate and was tempered by the sweetness of the maple whiskey.

Tea and Toast’s encounter with the Cooper’s Revival Whiskey was the most serendipitous pairing of the day as it came about purely accidentally, when initially we felt it would pair better with the gin. A perfect pairing is when two items taste better together than apart and in this case the delicate, mild flavours of Tea and Toast softened the alcohol in the whiskey and blended beautifully.

One of the more unique spirits at Kinsip is their Juniper’s Wit Aged Gin, which has the colour of a light whiskey from being barrel aged for three months. This aging process imparts a light floral aroma and removes the herbal taste that of a classic gin. The Earl Grey truffle hailing from Cocoa Bistro was a great match as the light flavour of the tea cut through the alcohol and brought out the floral notes mentioned above.

Delving further into the Cocoa Bistro selection box we found the Pink Grapefruit truffle and imagined it could be a particular challenge due to the tang of the grapefruit outside and the rich, white chocolate inside. It was in fact another surprising match when paired with the Woodland’s Whisper Pine Vodka, where the astringency of the pine cut through the sweetness of the white chocolate like a palate cleanser.

Their Salted Caramel truffle was lovely with Kinsip’s brandy. Salty and sweet, the richness of the caramel filling takes the weight out of the brandy and gives it an attractive floral flavour.

Our final match of the day was the Lemon Basil truffle with Cassis. Jeremiah, who’s passion for the culinary world lead him on a roundabout road to running a distillery, noted that basil and currants could be found in a culinary dish together and that’s why they complemented one another so well in this pairing. Basil and chocolate and cassis may not seem like a good fit, but just try it.

The spirit world has many followers who enjoy their offerings neat or with a touch of ice or water to take off the edge. For those who haven’t quite developed a love for a whiskey nightcap or a sip of rum, pairing with foods such as chocolates is an ideal way not to take these drinks too seriously. It’s also a great way to take your holiday soiree up a few notches or indeed your postprandial offerings and be the talk of the season!