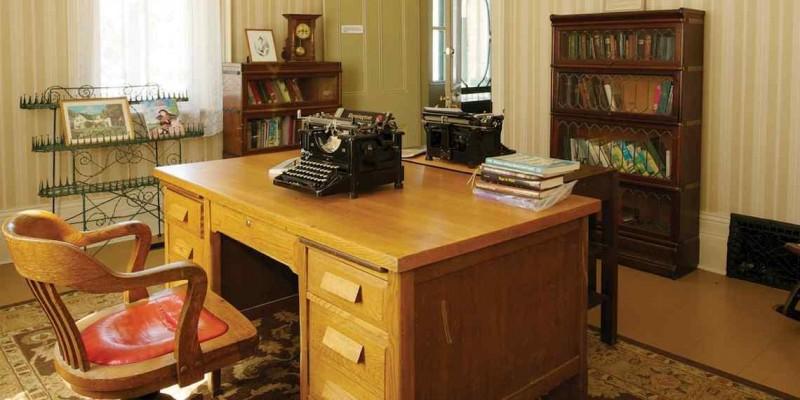 Maud of Leaskdale: The Kindling of a Kindred Spirit

In her beloved novel “Anne of Green Gables,” Canadian author Lucy Maud Montgomery (1874-1942) has her irrepressible young heroine say, “Kindred spirits are not so scarce as I used to think. It's splendid to find out there are so many of them in the world.” Well, there’s a hidden gem of a play in a small village northeast of Toronto in Durham Region that introduced us to a new kindred spirit – in the form of the author herself. Gleaned from her extensive published journals, the one-woman play, “Maud of Leaskdale” is a marvel of eloquent words, eloquently delivered by actress Jennifer Carroll. It is no less than bravura acting: the solo performer shares a non-stop inner monologue that spans 15 years in the life of its protagonist and a lovely two hours in the lives of its audience. Maud, as she was known, came to the village (or is it a mere hamlet?) of Leaskdale in 1911, as her husband, Ewan Macdonald, took up the post of minister at St. Paul’s Presbyterian Church in the small rural community. There they stayed until 1926, during which span Maud gave birth to three sons (the second of whom was stillborn), wrote half of her 22 novels, and endured both the death of her closest friend and her husband’s struggle with severe depression.

Like all of us, Maud knew joy and sorrow; but, unlike most of us, she was gifted with the astute observation, dry wit, and adept use of language to record her experiences – and to breathe life into her printed words. There is a formality of expression (in part, no doubt, a sign of the times in which she lived) to Maud’s words that is at once elegant, keenly observant, confiding, and gracious. Her words, given oh-so-convincing voice by Jennifer Carroll, are also gratifyingly accessible; for instance, a visiting friend is “as fat as a seal and as strong as a horse.” We instantly like this woman and get drawn into her observations of her new life. She confides, in what’s almost a stage whisper, that, “I have another opinion; but I do not tell it to all and sundry,” even as she proceeds to confide it to us. The play pulls us in to the inner thoughts and heartfelt feelings of this thoughtful woman, making us her trusted confidantes. And in the intimate setting – an unostentatious, down-to-earth, yet thoroughly charming country church (with gracefully curved wooden pews and the words “The Lord is in His Holy Temple” painted in scrolling letters on the front wall) – we are up-close-and-personal with this woman and her life: she addresses us directly, with disarming directness, and on occasion plays a tune on a piano. Indeed, the venue, the Historic Leaskdale Church, is the very same church where Maud’s husband served as minister. It’s as though she has been there all along, just waiting to be channeled by the actress who speaks her words.

Rapt: that’s the only fit word to describe our reaction to this wonderful one-woman show. The life, the times, and the inimitable character of the beloved author are brilliantly distilled in a performance that captures Maud’s perspicuity, wry wit, fearless honesty, and eloquence. And, my goodness, how she reminds us of her most famous creation, Anne, with the way she endows her observations with high theatrical drama: “The gates of my soul are barred against them; they do not have the key!” It’s a ‘theatrical’ way of expressing oneself, but it is also utterly sincere. It’s a tribute to Carroll that she can change moods in the blink of an eye – moving from heartfelt sorrow to contentment or happy expectation in a split second. Did we say rapt? Yes, we did, and that’s how we felt – captivated, enchanted, and half in love with the long-dead author whose wonderful turn of phrase and narrative voice had us hanging on every word, every gesture, and each shared confidence. Maud’s words are full of astute observations about the stuff of ordinary life. At times, she feels the loneliness of an outsider: as an author and intellectual, she cannot easily find others with similar outlooks and preoccupations in this rural community: “I feel as though I was stranded on a coast where no one speaks my language.” When she becomes pregnant, the prospect of giving birth for the first time amazes her. And when her first-born arrives, she marvels at “this tiny blinking mite of humanity… Love, such love, I never dreamed there could be such love.”

The play was written and directed by Conrad Boyce, from The Selected Journals of L.M. Montgomery, 1911-1926, edited by Mary Rubio and Elizabeth Waterston (Oxford University Press). It was first presented in 2011 for the 100th anniversary of Maud’s arrival in Leaskdale; and it has become an annual attraction ever since. Its sole thespian originated the role; and, now that she has returned permanently to her native Canada from a sojourn abroad, we look forward to seeing the talented Jennifer Carroll in other productions as well. In this play, she combines confidence, delicacy, and perfect timing, changing the mood and tone as she follows the high-points and vicissitudes of Maud’s life: “What has my life been but a succession of leaving things I loved?” When she writes her last Anne book, Maud makes a ‘dark and solemn vow,’ of the self-same sort her fictional heroine is so fond of, to henceforth devote her attentions to other stories and new characters. There’s wry humour here: she’s not at all keen on the neighbouring village of Zephyr (maybe she had it in mind when she said a small village could be “the pettiest place in the world”); and, as to the then popular board game known as crokinole, Maud insists that, “I loathe [it] with a deadly hatred.” There is a clear-sighted view of life’s absurdities, blessings, and losses. And there’s wisdom, too. To paraphrase Maud, ‘One cannot have imagination and the gift of wings, as well as placidity and contentment. And imagination is better.’ Those of us who are devoted to the imagination will have no trouble at all imagining that Maud herself is confiding directly in us, in her own intimate and inimitable fashion.

The play is a not to be missed experience. And, for a perfect after-play event, take a half-block stroll across the road to the Leaskdale Manse, where Maud and her family lived for 15 years. The house has been lovingly restored by the Lucy Maud Montgomery Society. Their work in replicating its furnishing (right down to the books Maud read) was facilitated by her meticulous chronicling (in her journals and photographs) of every aspect of her day-to-day life. And for a house of its vintage, this cozy abode is remarkably full of natural light – as bright and welcoming as the lady of the house herself. And what bibliophile could resist embracing as kindred one who confides, “I am simply a 'book drunkard.' Books have the same irresistible temptation for me that liquor has for its devotee. I cannot withstand them.” In her novel “Anne of the Island,” Maud said that, "It seems to me a most dreadful thing to go out of the world and not leave one person behind you who is sorry you are gone…” The fascinating play that recreates her life is warranty enough that she will never go unmissed!

Note: There are three performances of “Maud of Leaskdale” in 2019 – on Thursday, August 15 at 7 pm; Saturday, August 17 at 3 pm, and Sunday, August 18 at 3 pm. The venue is Historic Leaskdale Church, 11850 Regional Road 1, Leaskdale, Ontario (due north of the town of Uxbridge). Tickets are $25 for adults; $20 for seniors and students. For more information, or to purchase tickets, visit https://lucymaudmontgomery.ca/