Enigma Variations: or “The Beauty of Awkwardness.” 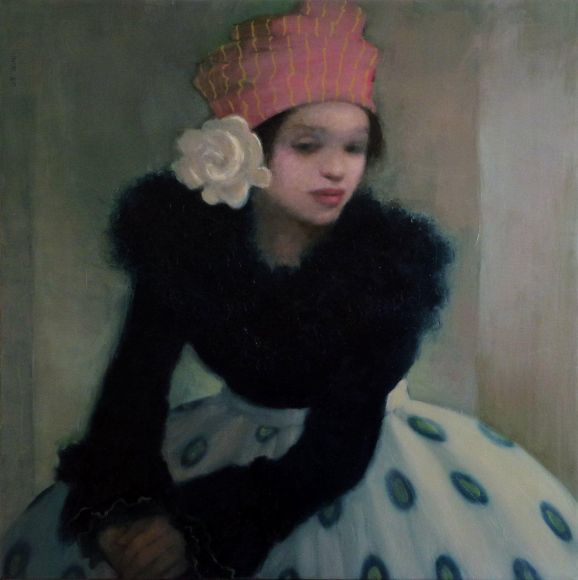 Since my last visit to Studio 22 a lot has happened, with the completion of the renovations alluded to in our article of fall 2016. Uniting the upper and lower floors, the staircase is now approached via a newly created elegant archway, which in turn is accessed from the sole ground floor entrance on King Street: a much neater and more manageable solution than the previous arrangement, when communication between levels was a challenge. Over the original doorway the intriguing Idea Manufactory sign remains. Though beautiful in its own way, the well worn battleship grey floors, have given way to a mellow, self-effacing mahogany hardwood, toned to resonate with the exposed brick walls. A more perfect space for the display of paintings and sculpture is hard to imagine, standards of presentation are excellent but subtle. Previously I suggested, “it looks like some someone has been trying very hard to not appear to have been trying at all,” and stand by that observation. It’s not Aladdin’s cave, neither is it staged or random and somehow it very successfully radiates joy: it feels good to be here.

Apart from experiencing the new environment my purpose is to discuss the recent works of JT Winik, a painter whom I had encountered earlier in a different gallery, where I confess to being tempted to chuckle at the delightfully perverse mix of Dutch old masters and Alice in Wonderland. I did resist the temptation however, as mirth would not necessarily have been condoned in that establishment. At Studio 22, one would suffer no such inhibitions.

JT probably needs little introduction, but for those who have yet to discover her works, she is an internationally respected Canadian figurative painter with a strong and mysterious narrative running through each piece addressing themes of isolation, introspection and I suspect perhaps adversity or even abuse. She has exhibited in Canada, Holland and Mexico and is represented by galleries from Amsterdam, Kingston, Montreal and Toronto. Working also in Spain and Holland, Kingston has a particular soft spot in her affections, as this is where she was inspired to return to painting after a long period of inactivity. Influences are obvious and acknowledged, Vermeer particularly. However, whilst the paintings may look like portraits, they are not, at least not exactly, they are fictions, imaginary characters created from marks and pigment. Unique and individual as they are, though there is a family resemblance, only very rarely are they drawn from life. To me this attests to a firm grasp of physiognomy and a command of traditional draughtsmanship. “It is colour, composition, line and texture that help conjure a sense of context.”

I’m waiting outside JT’s studio, the door opens, greetings are exchanged and we ascend to an upper level room where she works; it’s quite small and in stark contrast to the quietness of the paintings, the traffic noise blasts through the window and fuses with the smell of oil paint in the most intense late afternoon humidity. She tells me the show is to be called Enigma Variations, a title I recognize as originating from musical composition of Sir Edward Elgar, depicting a series of portraits of his inner circle, and allegedly harbouring a secret still waiting to be cracked. Is this a clue? Disappointingly not, JT advises it’s merely a reference to her work’s “enigmatic narratives and the process of their creation.” The interview is going well, perhaps too well, we talk about art education, mark making, art history, the Ottoman Empire, the Turkish influence in Mozart and Beethoven, and I begin to suspect I might be having the wool pulled over my eyes. Interviewing artists is akin to questioning criminals, they do not necessarily want to reveal their secrets, and who would blame them?

Enigma Variations combines paintings with two specific and connected themes, Girl or Girls in a Corner and Female Circus Performers, a Victorian motif is common to both. Scale is modest, the largest pieces being thirty by forty inches and others verging towards the miniature, but they are very concentrated, with the figure ground relationship favouring the subject, occasionally to the point of claustrophobia. With little to no movement, these pieces could definitely be called “still lives.” Compellingly ambiguous, the paintings either converge behind the subject or emanate from that unseen focal point to the edge of the canvas. JT confesses to an “infatuation with the interiors of a moment and the dichotomies they present.” The expression waifs and strays suggests itself, the subjects though younger, are generally of an indefinite age, and exude a defiant, determined recalcitrance.

Predominantly populated by single figures against plain backgrounds with little frame of reference regarding scale, the works are endowed with minimal ornamentation: lighting appears diffuse and is suggestive of illumination from multiple points of illusory candle light, colour is subdued and usually flat in finish with textures subtly detailed with marks made by the application of homemade cardboard scrapers. The technique is referred to as “sfumato,” or smoked in Italian. Appearing as if emerging from the canvas like developing photographs in the darkroom, there is a suspicion that they may disappear altogether if one turns one’s back. I’m reminded of one of the tools of Victorian stage craft, Culpepper’s ghost.

Exploring Girl in the Corner in White Dress, one wonders if she’s an exhausted bride taking a few moments respite, or even a forlorn jilted bride, or maybe simply a tired bridesmaid or party-goer taking a break from the festivities. Or perhaps she’s received an inappropriate proposition from an inebriated party guest? Despite the invitation to become thoroughly immersed in the narrative content, JT’s works can be enjoyed on a purely formal level for their essentially abstract painterly qualities.

Conventionally to be backed into a corner is to be in a weak position, although it’s also one from which one might spring forth with a vengeance, perhaps this is the key idea. JT sees vulnerability as intermingled with strength. Do we not talk of holding one’s corner? Tellingly, Boxer One depicts a circus pugilist sitting on her stool in the corner, arms resting on the ropes: is she about to capitulate, or coming out to land a knockout blow? Though cast in Victorian garb, the “#me too” movement is hinted at, “as it’s as likely then as now that disadvantaged young women were easy targets.”

One other influence perhaps reflected thematically in JT’s output, is that of Artemisia Gentileschi, an Italian artist working up to 1656. She was born in to an artistic family, with a respected artist father, and became an independently successful woman painter which in those times, was an extreme rarity. She also survived rape, and torture to prove her virginity, and succeeded in the legal battle with her aggressor. Artemisia’s paintings though perhaps typical of the day in the use of biblical and mythological themes, are quite revolutionary in focussing on the acts of strong women and suffering, and their sometimes exacting revenge on men as with Judith slaying Holofemes.

To this day the art world remains dominated by men and JT is making a compelling case for swimming against the tide, which could perhaps, have been an alternative title for this exhibition.

JT wraps in Victorian vestments her contemporary message and there is definitely more to this show than meets the eye. Is there a hidden meaning linking these pieces with the original composition by Elgar? Churchill was not talking about painting when he said “it’s a riddle wrapped in a mystery inside an enigma, but I think it’s appropriate. Go and see for yourself…drop me a line or send me an email if you think I’m right or wrong.