Josie Newman. What Next for Oshawa? 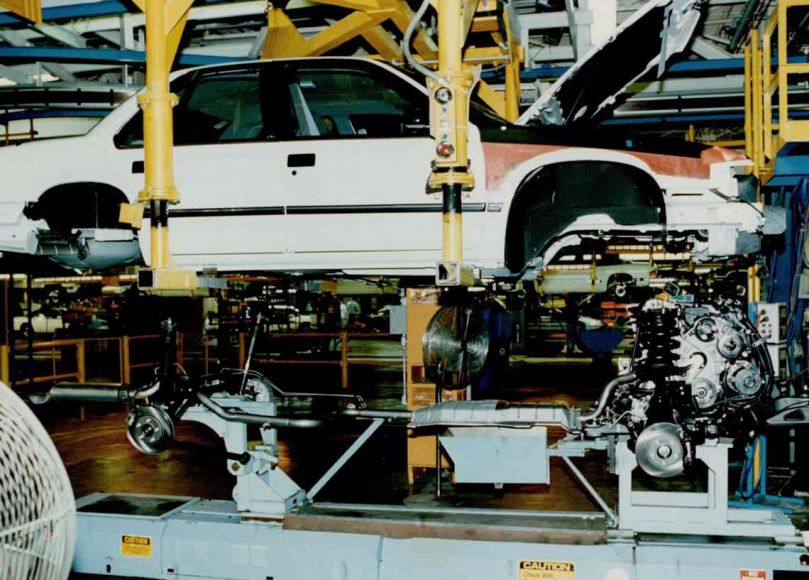 The closure of GM’s Oshawa car production facility in November of last year was the final nail in the coffin of an industry which has been shrinking for many years. GM Oshawa will continue to motor along with nearly five hundred employees, but only a fraction of those are currently working at the former stamping facility, where they are producing after-market parts for existing GM cars.

“The hope is that we will expand to making after-market parts for other car manufacturers, so our goal is that three hundred people will be working by the end of this year,” said Colin James, president of Unifor local 222, which represents twenty three companies in and around Oshawa, including GM.

“We had almost two and half thousand workers prior to the plant closing; almost five hundred chose to stay, so they have recall rights. The rest of the people took packages and moved on,” said James.

Jeremy Pooler, a GM employee of sixteen years now, is one of those who chose to stay. Although he is not currently working, Pooler says, “I'm optimistic that we'll be recalled within a year or two because of the expansion of the after-market parts that's planned for Oshawa.”

Pooler, who was a union rep in the car plant, was one of several people present in the Unifor Hall on a cold February afternoon for union member elections. He was running for the position of chairman.

When asked what kind of future he feels GM holds for him, he replied “From November 2018 until July 2019, I thought it was all over. Once the union leadership began talking to GM management though, and making plans for producing after-market parts and building a new vehicle test track in Oshawa, things started to change.”

GM Canada is spending $170 million to convert the former stamping facility into an after-parts manufacturing operation for three hundred employees and to build a fifty five acre vehicle test track at the south end of the plant.

GM Canada spokesperson Jennifer Wright said the test track, set to open this spring, will provide more jobs and will be connected electronically to GM Canada's technical centres located in Oshawa and Markham.

“Oshawa has been reinvented through this development, so our engineers at our growing Canadian technical centres can put their code to the road and do real-world testing of their advanced technology and software work,” advises Wright.

James said the union had signed an agreement in 2016 with GM Canada which stated that car production would continue in Oshawa until September, 2020, but GM management reneged on it. When asked, Wright did not comment on the 2016 agreement.

In its heyday, the company employed twenty six thousand people. A lot of the workers were paid so well and had such good benefits that many of them adopted a sense of invincibility, a notion that was furthered by the camaraderie within the CAW local, a predecessor to the current UNIFOR local.

“We were like a brotherhood,” recalls Chuck, a retired GM worker in his late seventies who worked for GM for over 30 years. “Life was good, I made great money, and my family was not wanting for anything. I am grateful to GM for providing a pleasant life for me.”

The lavish salaries, along with a diminishing Canadian manufacturing sector, contributed to massive lay-offs which began in earnest in the late 1990s. Various government sectors gave GM sporadic multi-million dollar loans, some of which were suspected to not have been repaid. A huge loan of $10.5 billion was provided by the federal government in 2009 to prevent the industry from floundering, following the Oshawa battery plant closure in 2005 and the Oshawa truck plant closure in 2009.

The decrease in the number of workers was partially due to outsourcing to other parts suppliers, said James. “The true number of people who were working for GM when car production shut down last November was eight thousand rather than almost two and a half thousand due to the fact many of the parts suppliers were outsourced.” “But many other people lost work due to the shut-down too, including an additional seventeen hundred parts suppliers who were non-union or were represented by a union other than UNIFOR, as well as thousands more who work at places GM employees patronised, such as restaurants, printing stores and safety boot suppliers.”

Kyle Benham, Director of Economic Development services for the City of Oshawa, confirmed that the recent lay-offs have affected Oshawa's economy.

“The unemployment rate went up in January for the first time in the past four or five years. It was 5.7 per cent, but was only 5.4 per cent in the middle of last year. That's higher than the provincial average of 5.5 per cent.”

Benham cited a Conference Board of Canada report which predicts Oshawa will see a one per cent decline in GDP this year in, but says it is predicted to increase again in 2021.

Durham College is working with GM and UNIFOR to produce as many alternative manufacturing jobs as possible for laid-off GM workers. The college has identified as many as five thousand jobs within commuting distance in shipping and warehousing, which require the same skills as the GM production line.