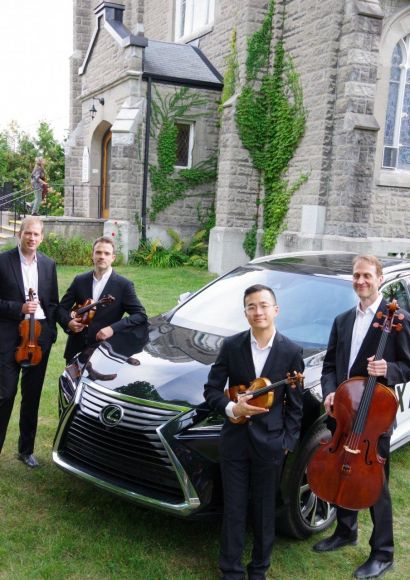 Sometime ago I pitched the idea to Aaron Bedard, General Sales Manager of Lexus Kingston, that there could be merit in having a car review written by an ordinary couple taking a “his” and “hers,” point of view, rather than the typical offerings of motoring journalists, who are usually men, existing in an obscure world of their own, speaking, a language known only to themselves, “torque vectoring,”.

Our qualifications for writing a car review are decidedly modest, we have both been driving around for over thirty years in a variety of generally unspectacular cars, apart from our beloved, but seriously wallet sapping, Saab 9000 turbo, and couple of three and five series BMWs. Occasionally we have watched Top Gear, and at least I, like Jeremy Clarkson, hail from Yorkshire. And that’s about it, and that really is the point. We will be offering an honest opinion of the car, premised solely on the experience of driving: we will not be discussing gear boxes, engine displacements or horse power. Our frame of reference is quite modest if not downright unfair: for the past few years Grapevine Magazine has pottered about in a humble Chevy Equinox, selected solely for its magazine carrying capacity. Understanding that knocking domestic product is a poplar sport in Canada, we have to say the Chevy has actually been a loyal and faithful servant over the years, spending little time in the shop.

As a prospective car purchaser, I consider myself to be undemanding: at 6’ 4”, I have to be able to get into it, and having achieved that, be able to see out of it, rather than find myself staring at the sun visor. From an appearance perspective, it must not be irredeemably ugly i.e. nothing like the Chevy Aztec, and it must be reasonably quiet at legal speeds. Tracey is perhaps more style conscious with a definite preference for SUVs over sedans, and top of her list of priorities is the cupboard count, for car park tickets, loose change for acquisition of same and provision for bottles of water, boxes of tissues, phones and purses. A decent illuminated mirror for the application of make up and checking that her hair is behaving itself is another priority.

With the RXL model Lexus enters the age old debate, “does size matter.” Adding a few inches to the RX to create the RXL, allows for additional seating capacity, though probably best suited to children – but if you are a soccer or hockey mum, or doing the school run on a snow day, this might be the vehicle for you. We can conclude that Lexus at least thinks size does matter, and probably expects a good proportion of current RX owners to trade up in due course, as fortunately the extra space comes without a large price tag attached. Available in six and seven passenger versions it’s designed to compete in the three row market, with the likes of Acura, Audi, and BMW, appealing to those drivers not thrilled with the van aesthetic offered by some alternatives. With the third row seats in use, decent cargo space remains, enough say for grocery shopping (or more likely, shoe shopping in Tracey’s case), with the third and middle rows in the horizontal position, you could probably export a teenager to college with ease. Lexus tops the sales charts in this category so clearly they must be doing something right.

It’s a 4 x 4, (There’s a little info-graphic to illustrate power delivery between the wheels.), so should be more sure footed in winter weather, but as Aaron pointed out to me, “four wheel drive doesn’t magically confer the ability to ignore the laws of physics or gravity,” as some drivers like to imagine, usually just before ending up in the ditch. Should that be your fate however, an array of advanced safety features come into play, including at least ten assorted airbags.

Visually it presents a very aggressive stance projecting a “don’t mess with me demeanour”, with sculpted side lines which are suggestive of flowing motion, even when stationary. Certainly it makes a statement. The purposeful vibe continues with the front grill resembling an open mouthed whale sweeping all before it: spotting that in the rear view mirror would definitely make me switch lanes. But then Tracey and I have different driving styles, I want to squeeze the last kilometre out of each tea spoon of gas, whilst Tracey is a somewhat more of an enthusiastic driver, so she and other heavy footed souls will be happy to learn the car runs on ordinary fuel, saving that all important extra twenty or more cents a litre.

Inside it is all muted sophistication, the steering wheel alone takes craftsmen sixty hours to make, real wood is used with some seriously cool aluminium inlaid strips, imparting a quality high tech feel. Seats, heated and ventilated, have numerous modes of adjustment and can almost provide a back massage. Dark charcoal black leather in this particular car, they feel soft and smooth to the touch, the dashboard harbours not so many flashy dials and gauges as to boggle the mind, an analogue clock provides a nice retro touch, and I expect the main event is on the large screen. Doors close with a satisfyingly dull quality sounding clunk…fit and finish is, as you would expect, first class, but without ostentation.

Salesman manager Dan, arrives to fill us in on the pre-flight checks. Springing to life the big screen reveals rows of icons and programmable, customizable menus and options…this process takes nearly twenty minutes, I’m surprised he can remember everything…there is little these systems cannot do to from ordering a pizza to picking next week’s winning lottery numbers. The radar adaptive cruise control is set, likewise the sensitivity of the lane departure warning system, the automatically dipping high beams, and the heads-up display. For my money the two most impressive of the many features of the car are the heads-up display, (which includes the compass, road speed, engine revs and even sat-nav directions), and is spectacularly cool at night, and the all round camera vision, which makes reversing a breeze…you can even tell when you are correctly positioned in the middle of a parking space. Plus if one has a stiff neck you can still be aware of your surroundings and drive safely.

Time to put the key in the ignition. Ah well, apparently things have changed since we last bought a car…there’s no key, only a fob thing that you do not even have to take out of your pocket. So I put my foot on the brake and press the ignition button…and basically hear nothing. I thought I’d gone deaf. At any legal speed this car is astonishingly smooth and quiet. Picking the car up in Kingston, and having appointments in Prince Edward County allowed an encounter with Highway 49, the nemesis of many a car’s suspension, having the richly deserved reputation of being the worst road in The County. It’s a road one would normally avoid, and whilst it was evident that some of the craters had been patched up since our last visit, it’s still as bad as driving over the surface of the moon. It’s hardly necessary to say that the Lexus cruised over the challenges presented in a calm and collected manner with the minimum of road noise intruding into the tranquility of the cabin and at that point we hadn’t even explored the sound system.

Leaving the County we took the 401 to Port Hope. Joining the highway at Trenton affords the opportunity test out the car’s response to tight rising bend coupled with a shorter than ideal climbing run in to the highway. Here you get little time to merge with the traffic…there’s power enough available for any such task though the engine note reflects the application of the right foot, temporarily disturbing the peace. (If you really feel the need, there’s a sports mode for even more spirited performance.) Highway cruising is just a vehicular dream, one wafts along on a magic carpet of tranquility, cocooned in silence, a testament to solid engineering and excellent sound proofing, aided by double pane windows. Closing in on Port Hope, a truck pulled out from the shoulder more abruptly than was necessary and whilst checking the mirror, (which has blind spot monitoring by the way), to assess whether it was safe to pull out, the car had decided to apply the brakes…radar controlled cruise control really does work. Equally impressive is the lane departure monitoring feature which actually is capable of following the ridges in freshly grooved pavement awaiting a coat of tarmac! Amazing! Sensors assisting the avoidance of car parking knocks are similarly impressively sensitive, being capable of responding even to bushes and high grass. Satellite navigation is remarkable too, it will automatically direct you to the nearest gas station if fuel is low, take you to the nearest restaurant if you need to refuel yourself, it can take you anywhere that has a web presence. Though there’s a downside to that, the proximity of all those shoe shops and jewellery stores is plain to see.

Normally when working I drive and Tracey mans the phone dealing with calls, texts and emails, this means our stereo is rarely used, which is a good thing as our musical tastes do not align. However, I had a quick blast of Miles Davis, (the Birth of the Cool, naturally), and then a Schubert string quartet, (D887), and can report the cello was rich and mellow and the top end of violin register didn’t remove the enamel from my teeth.

Another area of disagreement is power lift gate: Tracey thinks they are the best thing since sliced bread whereas I think they are a solution in search of a problem. If, carrying a box with both hands one can approach the car and open the trunk without having to put the box down, that would work for me, but here unless you have a companion to press the button, you need to put your load down and press it yourself.

In conclusion we both fell in love with the RXL, in truth it’s not hard to like. For a big car, it’s an easy drive, and the relatively short wheelbase confers agility and a tight turning circle. There’s plenty of power for enthusiastic driving: we did put the pedal to the metal, purely in the interests of research you understand, and it flies for sure, but creditable gas mileage is still achievable. A complete absence of cabin noise, rattles and squeaks continues to impress us both. At any legal speed the car almost feels slow, because it is so serenely quiet. If a quiet, comfortable driving experience is on your list of priorities, drop in at Lexus of Kingston, where Dan and Aaron will be delighted to share the Lexus experience with you.

Feature He said She said