From Refugees to Residents 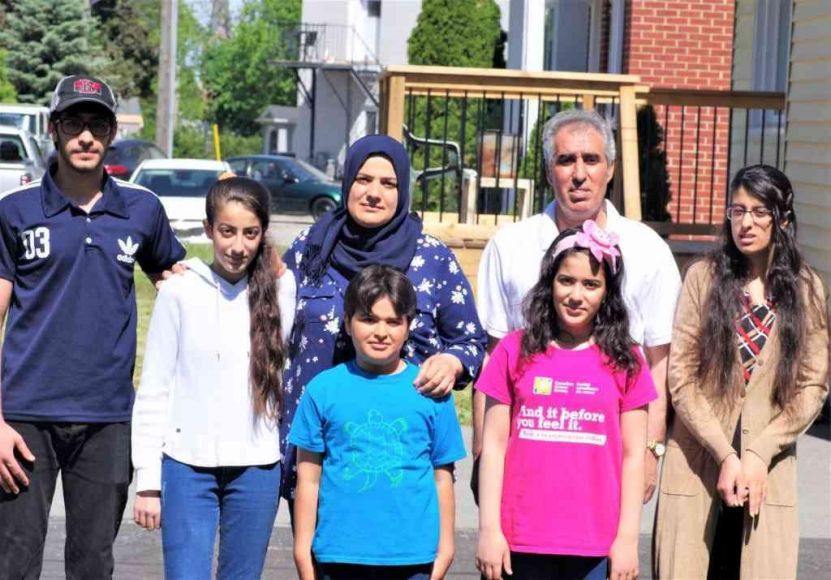 Words fascinate me...the way the meaning of a word is dramatically changed by the addition of just one letter. Case in point, add an e to refuge and you create refugee and the meaning changes from a place of sanctuary, to someone very much in need of one.

Refugee...a word which we unfortunately hear on the news all too frequently, originally entered the language in the early 1680s. Refugee, meaning “one who flees to a refuge or shelter,” was a term coined in response to the revocation of the Edict of Nantes in 1685 by the French authorities. This law guaranteed religious freedom and civil liberties to the Protestant Huguenot minority population. Without such legal protections the Huguenots hurriedly abandoned France and headed for England. Historians conjecture as many as forty to fifty thousand people fled to England seeking sanctuary.

Belleville is proud of its reputation as “the friendly city,” a reputation it continues to uphold by recently welcoming a family of seven Kurdish refugees fleeing from persecution in war torn Syria. The Abbas Taj al-din family, is father Abbas Taj al Deen, and mother Ghada Hagee, with their children, Ayham, Zainab, Aya, Nourhan and Adam.

To say history has not been kind to the Kurds is something of an under statement. Historically, the Kurds are indigenous to the Mesopotamian plains and highlands, more familiarly known as parts of present day Turkey, Syria, Iraq and Iran. Unfortunately this region has been subject to great instability and almost continuous fighting. There was hope that when Bashar al-Assad was appointed president of Syria things might improve, much as the “Arab Spring” brought changes to governments and some improvements to living conditions in Tunisia and Egypt. Bashar al-Assad had studied medicine at the University of Damascus and then undertaken specialized studies in ophthalmology in London, (UK), where he had acquired an English wife. Early promises of liberalization, with freedom of speech, democracy institutions, a free press, and modernization, came to nothing. The brutal conflict he instigated displaced eleven million people and is believed to be responsible for the deaths of as many as four hundred thousand people.

In fact, circumstances are so bad, that it has been impossible to even count the dead, half of the population are displaced and ninety percent live below the poverty line. The economy has been destroyed, there are shortages of fuel and electricity, hospitals have been bombed, which is a war crime, chemical weapons have been deployed, which is a war crime, schools have been bombed, which is war crime, and starvation has been used as a tactic of repression, which is also a war crime. In addition to these challenges, there is a massive state wide state sponsored drug addiction problem. Members of the Syrian elite are responsible for the wholesale manufacture and distribution of narcotics on a massive scale throughout Syria and the wider Arab world. This is one of the ways that the regime finances itself and keeps itself in power whilst subduing the restive population. Syria is propped up by Russia, because of its fear of an ISIS terror state in their backyard. In return, Russia benefits from the opportunity to access the Mediterranean from Syrian ports.

Against this dangerous and chaotic background the Abbas Taj al-Din family decided to move from their home in Damascus, where they ran an electrical equipment supply business. In 2015 they relocated to Qamishli, a hazardous seven hundred kilometre journey usually taking ten hours by bus: but negotiating passage through the many check points manned by an assortment of heavily armed and unpredictable factions, it took twenty hours. Unfortunately, this proved to be a case of out of the frying pan and into the fire. Though they were pleased to see relatives and old friends who shared their homes, there was no work, but there was the continuous threat of ISIS attacks. Due to the rapidly deteriorating situation in Qamishli, the family felt they had no choice but to return to Damascus.

After undertaking another hazardous journey back to Damasacus, the family found that the water supply had been cut off. Enduring a whole month without a regular, reliable water supply, they pressed into play an old well and for hours a day, filtered the muddy water as best the could, with only limited success. Bombing intensified and the family decided to try their luck in Lebanon.

Lebanon is a popular destination for Syrian and Kurdish refugees, but that does not mean that refugees are welcome or at all popular. The Lebanese government is dominated by Hezbollah, who hate Syrians. The family was unable to register their children in school or after the first year, to legally work, and had arrived with only the clothes they were wearing and a set of pyjamas, though the apartment they had rented had no beds. Food and water came from a small local supermarket. Lebanese water is sea water, so it cannot be used for cooking or drinking. Cash is king in Lebanon, as no one trusts the banking system and prices were double those of Syria. As prices rose, and their income dropped, they had less and less money to spend on necessities, as they had to pay the rent to keep a roof over their heads. Fortunately, friends and relatives helped the family out and Ghada Hagee was able to put a small sewing machine to good use, earning a little money as a seamstress. For three whole years the family was basically imprisoned in a small flat, in a hostile environment where it was alternatively too hot or too cold. When it was cold, they had no blankets. They were depressed and demoralized, but the saving grace was television and Ayham, the eldest child, managed to teach himself English by binge watching English tv channels. Again the family encountered the frying pan to fire experience when on the 4th of August, a large vessel and warehouse full of fertilizer exploded in the port of Beirut, breaking windows in the apartment in which they were living. A close call.

Quietly in the background, the family had been working with relatives in Canada, the Quinte Immigration Service and sponsors from a Belleville church to apply for permission to enter Canada. They flew first to Frankfurt in Germany, and hence to Canada, where they had a further frying pan and fire experience in the form of fourteen days “imprisonment” due to Covid 19 isolation.

Slowly the family are adapting to Canadian life, the children are enjoying personal freedom and relishing the opportunity continue their education. They can venture out without being fearful of hateful looks or verbal threats. Each has lofty scholastic and career ambitions. Ahyam wants to be a dentist, the eldest daughter plans to study pharmacology, Zainab, wants to be a doctor, and Aya a teacher, whilst Adam would like to be a famous athlete. Nouham has yet to decide.

Adapting to Canadian life has not meant abandoning their own cultural traditions. Hospitality is a big deal in Arabic culture and I can attest to the respect and generosity with which guests are treated from my own personal experience. Visitors are welcomed into the family as if they are family and effectively force-fed! There are no excuses, your hosts will not let you go till you are stuffed.

I asked Ghada Hagee to share a couple of delicious recipes of which I had partaken, with our readers. The dishes are called Tawa or Tote and Maklouba. You will find the recipe on our Recipes section on grapevinemagazine.ca

In some respects we have all had some experience of the life of a refugee, if only in a very mild way, with the restrictions imposed on our lifestyle by Covid 19. But no one has been shooting or dropping bombs on us and the food supply has held up quite well. I cannot imagine what that would be like. Unfortunately there have been so many refugee crises that I think there is a perception that the fact that there are refugees, is actually the fault of the refugees themselves, rather than the wider political context or conflict. Let’s try and pay a bit more attention to the next refugee crisis. There will surely be more.
Currently there are almost eighty million people who have been forced to leave their homes and twenty six million refugees, half of whom are children.