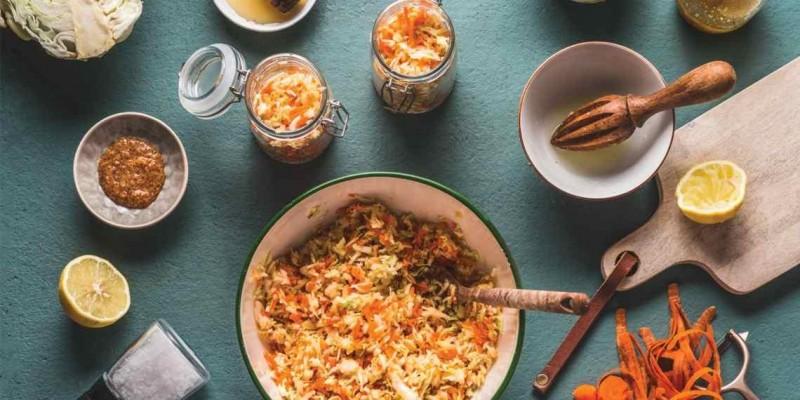 Think fermentation, and beer may come to mind. For others, it will be wine and spirits. Add cheese to the list. These obvious candidates form part of a long list of fermented products found in our everyday lives, yet many aren’t so obvious. You may be not be aware that many of the foods we consume regularly, go through a fermentation process. Think about coffee, yoghurt and bread which also fall into this category. Chocolate lovers may be interested to know it too is a fermented product, along with some teas. Then bring in kimchi and kefir or kvass and kombucha. While the traditional art of fermentation has been lost over the years, the number of everyday foods considered to have undergone a fermentation process is a lengthy one. “It’s a vast topic, but it’s specific as well because there are so many things that are fermented,” says Jenna Empey, Pyramid Ferments co-founder.

There is a science to fermenting, and while it can be a complex procedure, it is also a simple one with some easy make-at-home examples for novices to try. The process dates back at least 10,000 years and is essentially a chemical reaction whereby molecules, such as glucose (starches and sugars), are broken down anaerobically (meaning an absence of oxygen) by bacteria. Fermentation is derived from the Latin word ‘fermentare’, meaning ‘to leaven’.

“Fermenting food is something people used to do in communities or in families, and it is one of the oldest forms of food preservation, one that has fallen away from our industrialized food system,” says Empey. “People have lost contact with gut health and are now realizing the gut health and microbiome connection, and are returning to it. They want to know more, and I want people to be able to do this because it’s important.”

Pyramid Ferments’ co-founders Jenna Empey and husband Alex Currie are a little passionate about ferments, having operated their fermented food and beverage business in Northport, Prince Edward County since 2012. “This is year seven, summer eight, which feels like a very short and a very long period of time at the same time,” says Empey. Recently, they moved operations to the disused warehouse premises at the former Black River Cheese Company, where fermenting, processing, bottling, labeling and more now take place. “We keep growing every year, and every year is the best year yet.” Empey confides they do a lot with a very small team of just four people, noting both owners are in the business every day, whether it’s working in the kitchen or on the bottling line.

It is definitely slow food at its core, she explains. The quicker ferments (kombucha and kvass) take two weeks; the longer ferment is sauerkraut which is four weeks, sometimes longer. There is seasonality to what Pyramid Ferments do; pickle season starts in July when the local cucumbers come on, and sauerkraut season wraps up in the spring. “As we grow, we get better with timing, so we make all the sauerkraut in the fall and winter, but avoid summer because the cabbage is too soft,” advises Empey.

“We are not a single focus food company, we like to do a lot of different ferments,” she says, “We have thirteen main products, all of which are very different.” Pyramid Ferments makes kombucha, sauerkraut and kimchi, as well as pickles and kvass, and gut shots. . “My process is salt, bacteria, vegetables; or fruit, no salt.” While Empey and Currie grow some produce for use in fermenting, including herbs and some of the speciality hard-to-find ingredients, they also rely on local farmers and producers to help with supply, so they can focus on fermenting rather than farming. Empey notes they can easily get through 2,000 pounds of cabbage each month in sauerkraut season.

Two years ago, Pyramid Ferments decided a festival centred on their favourite topic was in order, and in 2017 launched the Ontario Fermentation Festival. It’s a grassroots event, organized by a team of four plus a core of volunteers. If it is pickled, fermented, brewed, cultured or distilled, it can be found at the festival. “We had been talking about it for several years and then the timing felt right, so we thought, let’s do it and see what happens, so we held the first festival and it was a dream. Year one attendance came in at an impressive 600 people, with the second year at 800.”

Empey describes Prince Edward County as the unofficial slow food capital of Canada. “We’ve always been a food community and there is so much of that present here and throughout the province. What we wanted do to with the festival was put the spotlight on food and beverage and fermentation, because there are so many delicious things and so many food choices.
“We really wanted to put the spotlight on what Ontario does best; what we do here, and to have a platform and build an industry because I think that’s important.”

The third annual Ontario Fermentation Festival has a family-friendly and fun vibe. It provides an opportunity to learn about ferments and fermentation, and to help people become comfortable with the idea and benefits of ferments. Sampling and tasting with demonstrations and workshops through the day will explain how it’s done, “because education is a big part of the festival” says Empey. “Knowledge and DIY are paramount because people tell us they want to learn how to create their own fermented foods.”

There will be many new and returning vendors, including food and craft vendors, plus a children’s area with activities, and even a ferment competition. Empey wants people to come and bring the whole family (kids under 12 are free) and just enjoy the day and sample all the fermented foods and drinks. Grown-ups will appreciate the all-Ontario craft beverage garden.

Fermentation revivalist and author Sandor Katz is the keynote speaker this year. Other speakers will cover tea, kombucha and wine, along with a miso and shrub talk and taste. “There will also be a mini-station, so people can learn about a ferment in fifteen minutes, such as sauerkraut, kombucha, kimchi and kefir.”

The sub-theme of the festival is food security and healthy food choices and options, says Empey. “Essentially, what we do at Pyramid Ferments is take cabbage and turn it into a really interesting functional food, with interesting flavours developed through the fermentation process, but with working with local suppliers and local food and Ontario food which is something very important.“

Empey describes the festival as a celebration of food. “It’s a celebration of fermentation, because it’s so vast and so intriguing, and you can do it yourself at home,” she says. “While it takes attention, some types are relatively low-tech and easy, so I just want people to have that knowledge and to be able to create healthy food for themselves.”

Organizers would appreciate hearing from anyone who can lend a hand on 3 August in any capacity. Volunteering gets you free festival admission, free refreshments and an invitation to the after party!