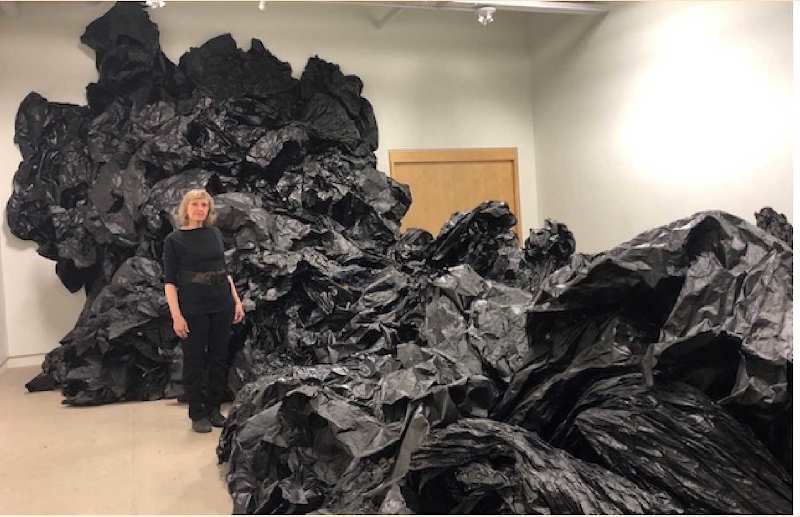 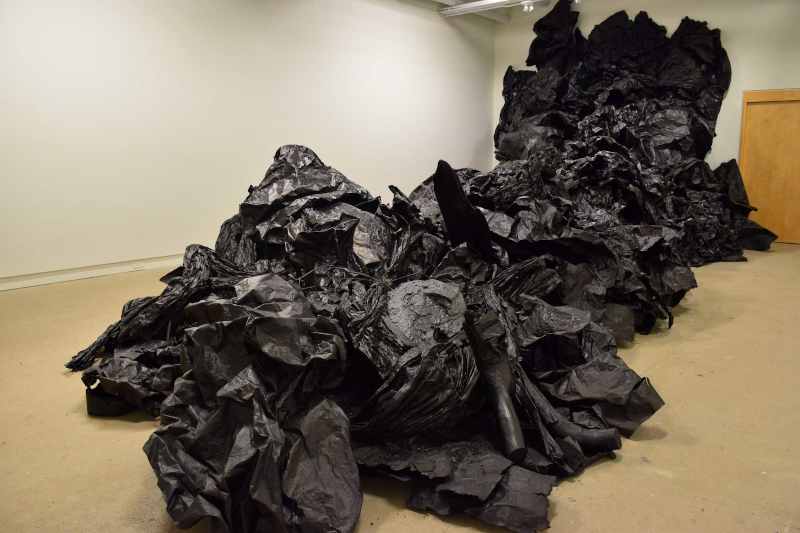 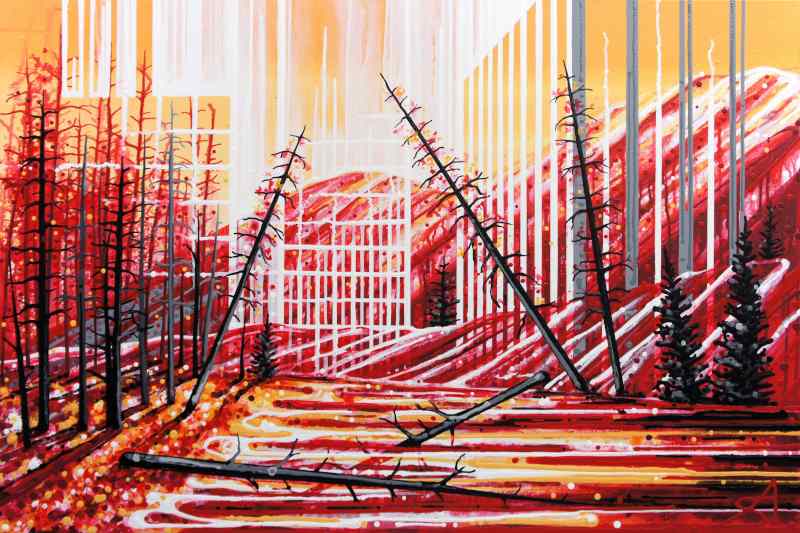 Anthropocene has become an environmental buzzword since the atmospheric chemist and Nobel laureate Paul Crutzen popularized it in 2000.  It gives a name to the current geological era, in which humans are having a profound impact on the Earth’s geological strata. Geologists are still debating the term, but at the Art Gallery of Northumberland (AGN), we are embracing it as a social and cultural tool for exploring the effect humans are having on the environment. To put it simply, people are changing the planet.
This spring the AGN welcomes two important art installations that raise awareness about our environment. Joan Scaglione presents a massive river flowing from ceiling to floor and across the gallery with an embedded sound component. Amy Shackleton installs a large-scale mural that a collaboration with Julian Brown transforms into an augmented reality experience that transports icebergs to city streets to communicate the devastating effects of climate change.

In the past decades, climate change awareness has gone from “Is it happening?” to “What will we do about it?” In both the AGN’s spring exhibitions, the artists address changes to Earth’s climate and help us consider that we need to respond, be informed, and most importantly change our behaviours, habits, and way of life. After all, rising temperatures are requiring plants and animals to adapt to shifts in their habitats and food supply—some species may be successful, while others may not.

Scaglione’s installation piece, SQUALL, takes the form of a violent storm, a dark wave approximately 35 long by 15’ wide by 12’ high that depicts the magnitude of a river and simultaneously responds to the architectural structure of the gallery. Scaglione constructed SQUALL from paper, plaster, and ink to express the fluidity of chaotic flow patterns, embedding the sound elements that give it voice within its organic form. The river holds massive handmade rocks, tree branches, and herds of horses. Toys and clothing hint at the presence of children, revealing human traces in this force of nature. It acts as a metaphor for what is happening in nature across the planet—a wake-up call. Rivers are profound spiritual forces, as Scaglione knows. Though part of nature, they have the power to destroy nature, the environment, animal and human communities. Climate change progresses, the melting Arctic will make Canada vulnerable. This is a river dying because of climate change, crying out through the sounds of a squall that engulfs the viewer.

Shackleton and Brown’s installation is entitled Playing with Fire and Ice. Using textures from Shackleton’s drip-painted mural, 3D models of icebergs, and plane-tracking technology, the artists will immerse viewers within a flooded urban centre complete with floating digital icebergs. The work is informed by Shackleton’s photographs of climate-ravaged landscapes across Canada: burning forests, flooding lands, and melting glaciers. Inspired by this immediacy, she juxtaposes local architecture with Canadian geography to ask pressing questions about our future. A 50-foot, site-specific mural—her largest to date—will wrap around the viewer on three walls. This new work diverges from her signature creative process using spinning canvases. Embracing the verticality and architecture of the gallery walls, Shackleton has adapted her paint-dripping technique onto a static, non-moving surface.

Brown provides an augmented reality experience that extends Shackleton’s mural and immerses viewers in the environment. Looking through any device a digitally flooded exhibition space allows them to experience first-hand this climate catastrophe. Brown and Shackleton remind us that we are all playing with fire. Their work is a call for action and a stark prediction for Canadian environmental futures.

We are living in an era in which people are changing the planet—the Anthropocene. In response, the planet’s climate is changing: temperatures are warming, ocean and air currents are shifting, glaciers are melting, and rivers are bursting their banks. Shackleton depicts a flooded environment with glaciers visible and floating about our urban spaces, a strange and familiar illustration of what may be coming. Scaglione’s sound component hurts, it is an emotional reflection, one of empathy and yearns for calm waters.

These two exhibitions explore aspects of this change, inviting us to reflect on our beliefs about the environment and perhaps reflect on our own role in these processes. Perhaps, by doing so, they may even inspire us to change.
Joan Scaglione | SQUALL
April 5 to June 20, 2021
Amy Shackleton and Julian Brown | Playing with Fire and Ice
March 22 to June 20, 2021
Captions to accompany the images.